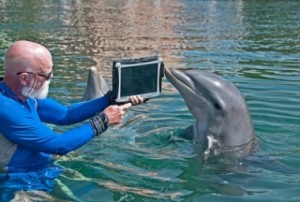 Pretty soon dolphins will be smarter than people. Look at this picture, a dolphin has learned how to use a laptop.

I hear so much whining from baby boomers about technology. I was recently in a meeting and a woman declared with great pride, “I don’t text. I told my children if they want to talk to me they’ll have to call me on the phone.” Awesome lady. I later learned she’s in a job hunt. Yeah, every employer loves someone resistant to change. Not.

Look, I’m not usually one to point fingers but guys, get on the bus. I’m not saying you have to text everyday. I’m not saying you need to tweet and Google +. But I am saying if you are resisting these things — at least ask yourself WHY. You have teachers (20 somethings and younger – digital natives) all around you.

There are two levels of adults who are at most risk of stupidification. One is like the person I mentioned above. Stuck, resistant, ego-driven. The other kind is the one who knows a little bit about social or technology and goes around proclaiming themselves an expert. Frankly, there are a lot more of these people around. Their arrogance is different. They claim they are open to learning… but they’re not. They ‘teach’ others about social media but really don’t understand much about it.

How can you tell? Do they talk all about themselves? Do they say they’ll teach you how to ‘promote’ your business with social media?

If they do they’re phony. Social doesn’t promote, it attracts. So at least be as smart as a dolphin and set a goal to learn 10 new things this year. The less you want to learn it, the higher it ought to go on the list.

Thanks to Laurie Ruettimann for the title of this blog post and for always being an inspiration. Check out her blog, the cynical girl.

Photo credit: my sincere apologies to the person who took or owns the rights to this awesome picture. I found it months ago and unfortunately didn’t save the URL so I don’t know who to thank (and search of dolphin and laptop yielded zip). So this big thank you goes out to the universe.

The Gig Economy...You Know You Want to Hear Me Sing