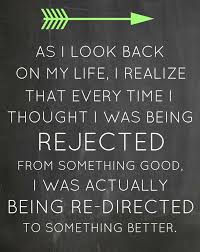 If you’ve been fired in the past year or two and it was your first time, you might still feel bad about it. I was fired 3 times (well, technically fired twice and laid off once). The first time, I worked in a shoe store in high school. They wanted me to recommend other stuff when people bought shoes. Couldn’t do it. So, I was fired. The next time,  I had been promised by my boss’s boss that things would change in the workplace…they didn’t change, I was insubordinate. The third time, I had pre-negotiated a leave date so technically it was a lay off. (I was never fired for cause!)

The first time I was devastated. The second time I thought the world would end. The third time was, no big deal. Every time I left a job involuntarily, something better turned up next.

For inspiration, glance at this article, “21 Great Successes Who Got Fired.” The list is pretty impressive …

The list of athletes who failed is long but one stands out… Michael Jordan. He was cut from his high school basketball team. Think about Jennifer Hudson. An American Idol loser who went on to win Oscar.

Whatever is happening with you right now, know that good things are going to happen for you. Hold on for one more day. I believe in you.

Image credit: Getting Fired: A Blessing

The Beauty of the Winter Garden