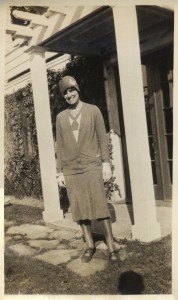 I had the good luck of being born into the family of Dorothy Fitzgerald. She was my great aunt but I considered her my grandmother. She lived at home until 3 months before she passed away at the age of 99.

Here she is in Gloucester, Mass. in 1929. She was a working woman (she worked for the IRS) and was the single finest human being I have ever known. Let me tell you a bit about her.

– She was kind to everyone.  No exceptions. Race, age, economic status– everyone was treated the same. With respect.

– She never passed judgment.  Dorothy was intelligent and well read and if asked, she would give a thoughtful, considered opinion but more often than not,  she’d say she really didn’t know much about x or y (even if she did).  She was open to hearing what others had to say.

– She was fiscally responsible. She had money and spent it wisely but she was also generous. She had impeccable taste. Her home was beautiful and welcoming. We often shared holidays with people from other countries who found themselves in the US.  She knew that the best gifts were time and love.

– She was helpful when she could be and knew when to keep her mouth shut.

It was my privilege to know her and be part of her family. She was gracious without being phony and always generous of spirit . If I can be half of the person she was, I will consider myself a success.

Will you tell me about your role model? I am looking forward to the inspiration!

Pay Me To Interview, Pay Me to Work.