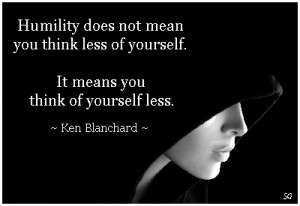 A lot of us think if only I were in charge… things would be different. I’d make this happen; I wouldn’t let that happen. We’re sure we could do better.

But the truth is that if you’ve ever been responsible for the livelihoods of other people, you know that it’s not easy. If you are a thinking, caring individual; carrying the fate of a family’s paycheck in your hands is daunting.

In the world of  CEO’s, certain people immediately come to mind: Bill Gates, Steve Jobs and Warren Buffett.  Do you think they are good or bad CEOs? Well, it’s hard to argue with success but I wonder what really does make a good chief.

So I turn to a man whose opinion I admire, Peter Drucker. Here’s an article he wrote for Harvard Business Review in 2004 titled, “What Makes an Effective Executive.” In it he says that effective leaders follow 8 simple rules; the last of which is “think and say we, not I.”

Here’s another perspective from the researcher Jim Collins, (Good to Great).  “The best CEOs in our research display tremendous ambition for their company combined with the stoic will to do whatever it takes, no matter how brutal (within the bounds of the company’s core values), to make the company great. Yet at the same time they display a remarkable humility about themselves, ascribing much of their own success to luck, discipline and preparation rather than personal genius.”

We get to act as CEO’s of our lives, our families, our careers and perhaps a few other opportunities. Are you confident in your abilities and contribution but humble about how outcomes are achieved? If you are, then maybe the ‘you’ company is on its way to being successful.

We're All Teachers (and Students). Everyday.