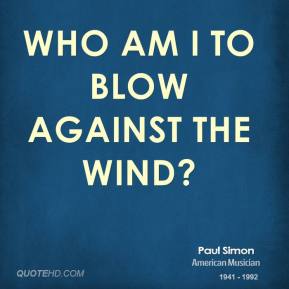 When I take my dog outside and it’s windy … she stops and puts her face directly into the wind, even if it’s cold outside. It’s like she’s thinking, this wind is awesome … life is good.

In Paul Simon’s song, “I Know What I Know,” he uses the phrase.. “who am I blow against the wind?”

I take the lyrics to mean… “if you say so.” If you think I’m rich, a loser, a genius, a nut job… who am I to try to change your mind? It implies a passive attitude toward life. For me, that takes a lot of energy. Of course, it takes energy to stand up, speak up and challenge also. Sometimes we are greeted with a sh*tstorm. Sometimes we are patted on the head. Sometimes we help make a difference.

Rocker Bob Seger sang a song called, “Against the Wind.” In the song, Seger seems to think that as a young man, he didn’t do what was expected of him… that he did what he wanted, whether other people liked it or not. Then he got old and stopped ‘running against the wind.”

I think that there are times to run with the wind and times to run against it. No one can tell us when to go with or against. I will suggest that if you always run with (too conforming) or run against (too “too”), then think about mixing it up a little.

I’ve always run against more than with and for me, it’s been good.

Do you run with or against the wind?

And Now For Something Completely Different...

I Hate Being A Grown Up, Maturity is Overrated