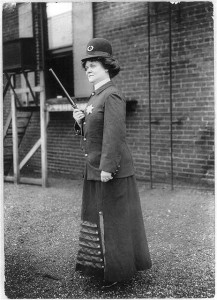 This is a photo (1909) showing what a woman might dress like as a police officer. The first female police ‘woman’ was sworn in September 1910.

When you realize that it’s only been 5 generations since we brought the female voice and presence to law enforcement in this country, is it any wonder that women around the world are still repressed and assaulted as a matter of course?

This post isn’t a lecture about Leaning In… Sheryl Sandberg’s new book about women in the workplace. Sheryl is entitled to her opinion and I applaud her efforts to amp up the dialogue about people, work, choices, skill building, education, decisions, etc.

I would like us to think about our daughters AND our sons. No matter what age they are…

What are we teaching them about respect for all people?

Recently I learned that for a Japanese woman, it is very difficult to have both a career and a family. Thousands of years have brought them to this place. I also became aware that rape is used as a weapon of war – to literally ethnically cleanse the enemy by impregnating as many women as possible.

The world is a complicated place. Teach your children well.

Judgement is Easy, Integrity is Hard

Be a Great Negotiator in 5 Easy Steps